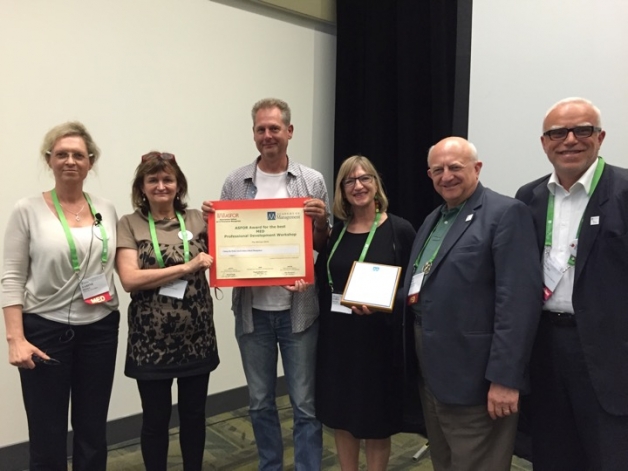 “Change the World, Teach Evidence-Based Management” was the title of the Professional Development Workshop (PDW) that won the 2015 Best AOM MED (Management Education & Development division of the Academy of Management) PDW award, sponsored by ASFOR (the Italian Association for Management Development).
Organized by Denise M. Rousseau (Carnegie Mellon University, USA), Eric Barends (Center for Evidence-Based Management, The Netherlands), and Sara Rynes (U. of Iowa, USA), the workshop included speakers Xander Lub (Vrije U. Amsterdam), Rob Briner (U. of Bath, UK), Neil Walshe (U. of San Francisco, USA), Barbara Janssen (TEN HAVE Change Management, The Netherlands), Rowena Kerkhove (U. Applied Science Amsterdam), and Tina Saksida (U. of Prince Edward Island, Canada).
Evidence-Based Management (EBMgt) is the integration of research and organizational evidence with individual expertise and stakeholder concerns. This workshop dealt with helping university students find and critically appraise evidence by themselves, an approach adapted to management education from medicine; with curricular implications and spillover effects of introducing EBMgt, and with concerns from attendants’ own teaching.

The Academy of Management (AOM) is the most influential professional organization for Management researchers, instructors and developers from the United States. Over 10,000 researchers, academics, students and professionals met in Vancouver to present and learn about the latest research findings on management this past August 7-11.
The Management, Education and Development (MED) division, one of the largest groups, specializes in research about learning and teaching at all university levels.

In 2015, this division experienced a 108% increase in PDW proposals compared to the previous year. Twenty-four PDWs were scheduled, a 55% rejection rate; still, the number of PDWs that competed for ASFOR’s Award proportionally increased. Selection of the Best PDW award took two stages: first, of all accepted proposals, a sample of the most promising was preselected and ranked by a panel of five judges during June and July, directed by the PDW Chairman, Dr. Miguel R. Olivas-Luján, a Professor of Management at Clarion U. of Pennsylvania (USA); the panel’s rankings identified four finalists. Another panel of on-site judges then attended each of those four workshops and evaluated the workshops on the quality of their execution, its perceived value for the membership and other assessments. The winning PDW was identified a few hours before the awards were announced.